A frustrated senior Mia Weiler just needed a hit. She was 0 for 3 in the game.

They got both in dramatic fashion last Wednesday at Challenger Park during part deux of the annual Old Settlement Showdown with crosstown rival Ste. Genevieve 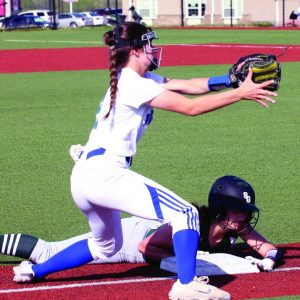 Weiler walked off a double up the middle to score sophomore Addison Donze to give the fourth-ranked Warriors (12-5) town braggin’ rights until next time.

Valle came into the game frustrated after winning the regular-season title of the MAAA Conference earlier in the season, but taking fourth place in the MAAA Tournament.

Ste. Genevieve (12-7) is the one frustrated now because it could have been the winners of this game when its go-ahead run in the sixth was nullified (they would have led 3-2) on a questionable obstruction call at second base by the umpires earlier in the game.

For more, check out the Herald’s May 4 print edition. 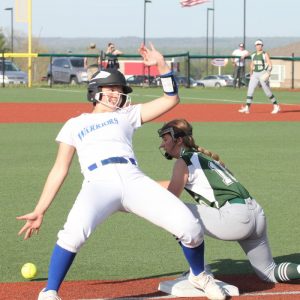 Valle Catholic freshman Abree Zipprich tries to stay on third base as Ste. Genevieve freshman Ava Huber chases a low throw that got away on the play. (PHOTO BY MICHAEL BOYD JR./Herald staff)