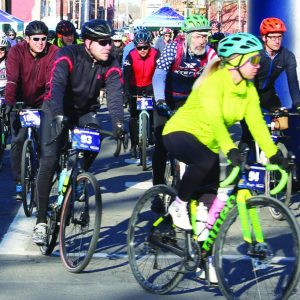 The first negative feedback about the event, however, came in after Wix had reported on it during the quarterly meeting of the combine Tourism activities Council (TAC) and Tourism Tax Commission (TTC) on April 19. That led to some discussion of possibly relocating the start and finish lines next year.

“The StG Gravel Classic turned out very well,” Wix said. “We were elated. When we first started out the Gravel Classic we hoped that maybe 100 participants would be a very good, solid number – especially for a first-time event and something new to the area. We totaled 417 riders, which was very impactful for the downtown area that day, in a very positive way, not in an invasive way. It looks like most of the people who were involved with vendors did very well.”

He added that Trailnet, the St. Louis biking organization that put it on, were also very pleased.

“It seemed to be very positive feedback from the organizers of the event, Trailnet,” he said. He said he understood several local businesses had reached out to Trailnet afterward, to plan for next year.

Lawrence Myers, owner of European Entitlements, located right beside the start/finish line, did not share the good vibes.

“Everyone I talked to said it was horrible for them as merchants, myself included,” he said. “It wasn’t great.”

City Administrator Happy Welch said that, had more notice been given to business owners, they might have chosen to set up booths or tables outside.

“One thing we noticed was that people stuck around,” Welch said. He noted that in past biking events, cyclists took off as soon as the event was done. This year, he said there seemed to be “some spillover of people coming in,” according to some merchants.

Discussion turned to the location for the beginning and end of the race, the intersection of Market and Main Street, necessitating both streets being blocked off.

“It may be the location,” Welch said to Myers. “That may have blocked what could have gotten to your place.”

Welch said they are looking at putting the start/finish line at another location next year.