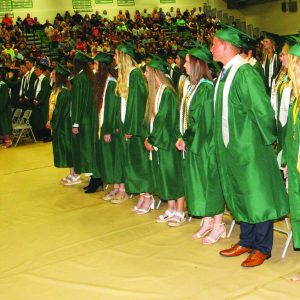 Student input has led to some adjustments in seating at next month’s graduation. Here 2021 graduating seniors stand during part of the proceedings. (Herald file photo)

New Ste. Genevieve R-II Board of Education members Jamie Naeger Ballew and Joshua Gettinger were sworn in during a reorganizational board meeting on April 14. David Bova was elected by acclamation to continue as president, with Eric Basler vice president and Martha Resinger as Missouri School Board Association delegate.

Then, during the regular meeting that followed, the new board voted to renew its long-standing contract with Fallert Bus Services.

Dates and times were also officially given for spring events. Prom was last Saturday, while graduation will be May 21. It will begin at 8 p.m. the annual retirement banquet will be at 6 p.m., May 13 at the Elks Lodge.

Dr. John Boyd, high school principal, told the board of some things that will be different at this year’s graduation.

The ceremony, in the Peggy J. Johnson Gymnasium, will see the graduating seniors out front, facing the action directly, rather than sitting to one side.

“Getting the feedback from the kids, at having them having the ability to actually watch the graduation ceremony instead of having to look at it from the side. We got a ton of amazing feedback from our kids.”

He added that he was he was “extremely excited for all three of those” special events.

The board also approved the recommended Summer School schedule of classes in Algebra I, Applied Math II and III and English I-IV. It has a total of 60 hours each semester, with first semester going June 1-17 and second semester June 20-July 7.

The municipal election results were certified for the board election and the Prop SG election.

“I know the board is very appreciative of the board’s support of that,” Bova said.

Dr. Julie Flieg, superintendent of schools, reported that the district had reached an agreement with Fallert Bus Services for another five years.

“Fallert us has served this district for a very long time,” Flieg said, noting that Fallert always hire local drivers.

The board unanimously voted to accept the new contract.

Flieg said the district “is seeing more and more needs” for the additional special education teacher and speech pathologist.