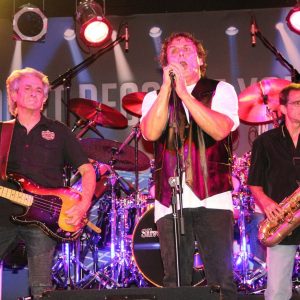 The versatile group Blue Marlin will kick off the 2022 summer series on June 3.

Entering its 14th season, the series looks stronger than ever. In fact, the inaugural Winter Music Series seems to be generating even more buzz for the summer series.

“Summer Music Series pretty much carries its own,” Chamber Director Dena Kreitler said. “I do feel like after doing the Winter Music Series, there is a little more buzz about the summer Music Series. Our ticket sales have really kind of skyrocketed. We usually don’t sell tickets until May.”

This year, however, the Silver Bullet show is nearly sold out already.

“Our ticket sales have been going very well. It started in February,” Kreitler said. “So, I do feel like there was a little bit more of a buzz around it.”

In fact, fans should hop to it and get tickets while they can.

“Our sponsorships have increased significantly this year. That means we only have about 115 tickets available to the public,” she said. “So, if people want to get their tickets or to see a certain show, they need to get their ticket early. Like I said, the Silver Bullet group is almost sold out. If you think you’re going to wait till the first part of July to get that show, it’s going to be gone.”

This year, four of the eight are back from 2021, while the other half are fresh sounds.

“We have a very strong lineup,” Kreitler said. “I’m excited about it. I think is going to be a really good season.”

The second group to hit the historic Orris Theatre stage will be ZZ Top tribute bad Trezz Hombrezz, on June 10.

“They were supposed to be in or original lineup,” Kreitler said. “They had to schedule due to a conflict. So, technically, this year they are new.”

After taking a week off for the Fourth of July holiday the series resumes July 8 with Trixie Delight, another versatile group who played rock hits from the 1970s to the 21st-century. Two new groups, follow, Big Rigs on July 15 and Almost Famous on July 22.

The nearly sold-out Silver Bullet STL will then wrap things up on July 29.

“We try to change shows every year,” Kreitler said. “Sometimes we replace four shows and sometimes we just replace three.  Either way. We don’t like to do more than four shows. “That gets a little complicated beyond that. Typically, three is our soft spot that we always like to replace.

This year popular Fleetwood Mac tribute group Big Love could not make it on any of the open dates.

“Ideally we want to keep things fresh and bring in new talent,” Kreitler said. “We will, occasionally bring back a past performer.”

Kreitler hopes that will be the case with Big Love, always a fan favorite here.

“They were a sold-out show from the very first year that we had them,” she said.

Although some fans would probably love to see various bands back every year, keeping a fresh influx of talent has kept the series fresh and growing over the years.