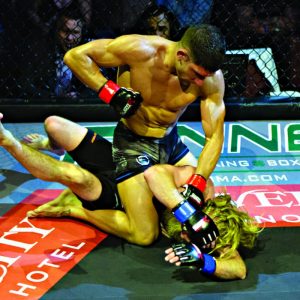 Professional fighter Jesse Martinelli of St. Louis, a 2011 Ste. Genevieve High School graduate, grounds and pounds Tyler Stokes of Kansas City, Kan., for a TKO victory (Round 3, 4:07 mark) during their flyweight bout at ShamrockFC 337 in St. Louis, Mo., on April 9. Martinelli improved to 2-0 as a pro. The Martinelli-Stokes bout was one of three on the event’s main-card section; there were 11 fights in all. (PHOTO BY JIM RANGE PHOTOGRAPHY/Shamrock Fighting Championships) 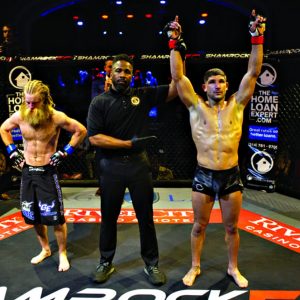 Jesse Martinelli, a professional fighter formerly of Ste. Genevieve, raises his hands in victory after defeating Tyler Stokes of Kansas City, Kan., via TKO in the third round of their co-main-card flyweight bout at ShamrockFC 337 on April 9. (PHOTO BY JIM RANGE PHOTOGRAPHY/Shamrock Fighting Championships)

Jesse Martinelli defeated Tyler Stokes via technical knock out during their co-main-card bout at the Shamrock Fighting Championships 337 on Saturday, April 9, at the River City Casino in St. Louis.

Martinelli defeated Stokes, of Kansas City, Kan., with the ground-and-pound finish at the 4:07 mark of Round 3 to earn the TKO in front of several family members, friends and sponsors.

“I’m so blessed to be able to chase my dream,” said Martinelli, who is a former wrestler at SGHS and still helps with the local youth wrestling program.

Martinelli hopes his next bout will be ShamrockFC 340 on Friday, Sept. 16, at the River City Casino. However, he does not know right now.

“I just want to thank all my family, friends and fans who come out to support me as I start my young career,” he said. “Also, I want to give a big thank you to all my sponsors for joining me on this wild ride.”

There were 11 fights on the night, but the Martinelli-Stokes flyweight fight was one of three on the main card portion.