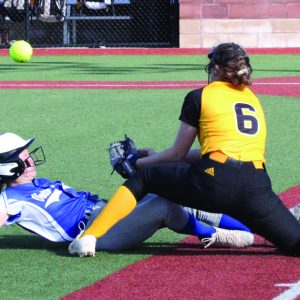 Junior Macy Wolk ripped a 3-1 pitch with one out to right field to single home sophomore Ade Weiler for the game-winning hit, thus giving No. 3-ranked Valle Catholic a 6-5 softball victory over the stubborn Bernie Mules.

Weiler sprinted home from second base on Challenger Field to thwart the Mules’ late rally and kept the game from reaching extra innings, therefore sending the local fans here celebrating in the Ste. Genevieve County Community Center’s back yard.

Valle freshman ace Abree Zipprich struck out 15 Mules in the process, which is one shy of her career high she set earlier in the day against Malden; 31 strikeouts on the day.

With the Mules (9-7) having been on the wrong end of a no-hitter against Ste. Genevieve across town earlier in the afternoon, they were determined to head the nearly three-hour ride back to Stoddard County with a win before Wolk spoiled that thought.

Valle (8-2)  gave up a 5-2 lead as Bernie slowly tied the game at 5-all with two runs in the top half of the seventh to set up the dramatics.

The Warriors, the No. 3-ranked team in Class 1 who have won eight of their last nine games including six straight, scored a run in each of the first five frames.

But the Mules, who have lost three of their last four games, plated two runs in the fourth and one in the sixth.

Wolk finished 2 for 4 with a stolen base and the game-winning RBI. Emily Flieg also had two hits and two runs batted in.

Zipprich allowed the five runs on 11 hits and two walks. She struck out the No. 3 batter Anna Eaton four times.

But Mackenzie Powell, one of three Powell sisters on the team, finished just a home run shy of hitting for the cycle and score twice. Gracie Cluck, Courtney Walker and losing pitcher Sara Guzman also had two hits.

It was the second game of the day for both squads as Bernie earlier lost to Ste. Genevieve across town, while Valle earlier beat Malden.

“It was a fun day,” said Warriors head softball coach Kurt Basler. “We played a couple good teams and we played really well.”