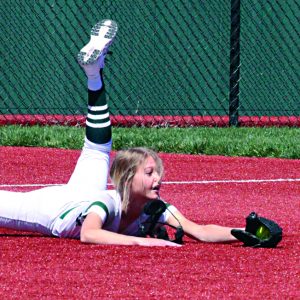 Senior center fielder Izzy Basler had a grand slam and freshman shortstop Ava Huber was a home run shy of hitting for the cycle as the Dragons continued torching any opponent that dared to enter their lair last week at Leon Jokerst Field.

Ste. Genevieve closed out last week with both solid pitching and scorching-hot bats and Saturday they feasted after defeating the Malden Green Wave 16-1 in four innings in both teams’ second game of day.

Despite two errors, the Dragons (8-4) won their sixth game in seven tries, including five straight. They outhit the Mules 14-3, five extra-base hits included. All 14 hits came from the top six batters in their lineup, each with two hits or more.

“I am so proud of how the girls played on Saturday” Dragons head softball coach Rebecca Keim said. “They’re continuing to improve every single game, and they’re beginning to understand and see many of the things I’ve been talking and preaching about since the season started.”

They trailed 1-0 at mid-first inning, but they tied it with a run in their half of the first and plated seven runs in both the second and third innings.

With another run in the fourth, they game ended via the 15-run mercy rule. The Green Wave (5-6) committed three errors.

Junior Faith Lincoln earned another victory in the circle, striking out four and walking no one, while allowing the unearned run on three hits.

Huber finished 4 for 4 with a double, triple, scored three runs and drove in a run from the leadoff slot.