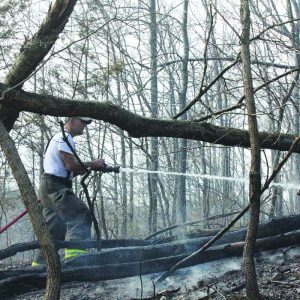 Above, a vehicle and a shed were threatened by a brush fire on the Twin Turret grounds Sunday. Firefighters soon had it under control, with only some brush (below) burned. (Photos by MICHAEL BOYD JR./Herald staff) 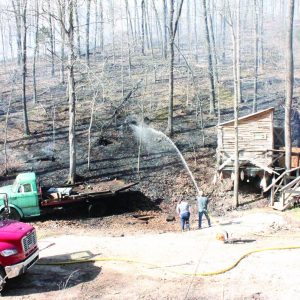 Firefighters from several departments responded to a brush fire that also threatened a structure and a vehicle  Sunday evening.

The fire was on the grounds of Twin Turret Farm and Castle vacation home and rentals on Brushy Creek Road, south of Minnith.

The firefighters made quick work of the fire, made dangerous by brisk winds.

Twin Turret personnel said that guests did not have to be evacuated.

“The fire was on a hill that was not near the house,” they said. “There was a shed on the hill but only cosmetic damages due to the fire fighters’ amazing work.”

There have been numerous brush fires in the county the past two months, usually during dangerously windy conditions.