Things were not as dire as had been feared with the Franklin Bridge.

The MoDOT personnel had become alarmed when the cleaning out of brush around the edges of the bridge revealed what appeared to be significant deterioration to the structure.

The bridge, built in 1920, had been on the verge of being condemned in 2020. The county spent nearly $50,000 to fix a bad turnbuckle and replace the wooden planking with a metal grate.

Hess admitted that, based on photos he had seen, he was afraid he would have to tell county commissioners the bridge had to be closed. However, he found that the deterioration was not as bad as the photos had indicated.

Hess, who checked out the bridge, along with Crocker, Jernigan and County Commissioners Garry Nelson, Karen Stuppy and Randy Ruzicka, plus Road and Bridge Foreman Scott Schmieder, believes the problem can be taken care of.

The small, pony truss bridge, he said, has obviously been strengthened and repaired more than once over the years since 1920. Another such reinforcement of the lower section of the truss and replacing of a gusset plate on the western two corners of the bridge should make it sound for some time, Hess said. One corner definitely needs attention right away, while the other is not as bad. It was agreed, though, that it might be best to repair both at the same time.

Hess did stress that “even in its prime,” the old bridge was never going to be rated for holding more than three tons.

Late in 2020 the county had metalsmith Pete Harnish replair the turnbuckle and replace the deck.

For the handful of county residents who live on Franklin Road, the bridge shaves miles and considerable time off of the alternate route. It is also much safer than going through Indian Hills – especially in bad weather. 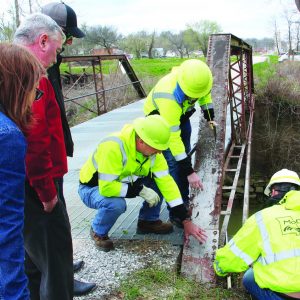