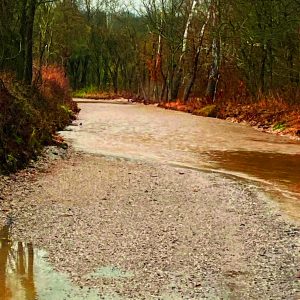 Boyd Road was among the county roads heavily damaged by flash floods on March 30. (Photo courtesy of Scott Schmieder/Special to the Herald)

Scott Schmieder, road and bridge foreman, reported last Thursday that heavy rains earlier in the week had done considerable damage to county roads. He told county commissioners it would take “a couple of days” to get everything repaired so that crews could get back onto prepping Charter Church Road for paving. One of the harder hit roads was Boyd Road.

Schmieder said he had to call two men out to help that Wednesday evening and that he worked until 9:15 or 9:30 p.m.

Presiding Commissioner Garry Nelson agreed that there was a lot of damage and a lot of debris on low-water slabs.

Nelson who has been bemoaning changes to the Off-system Bridge Replacement and Rehabilitation (BRO) grant program that no longer allows these low-water slabs to qualify for funding, remarked that, “If they do the right thing with BRO money, we can fix some of them.”

Schmieder and the commissioners also discussed a new salt shed for the road and bridge office. They are thinking about having one section for salt storage and one for equipment.

It was agreed that a solicitation for bids to design and build such a structure would be placed in the Herald.