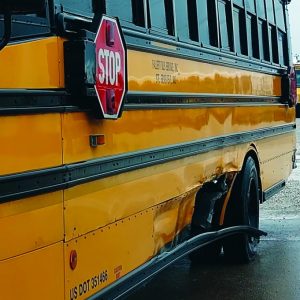 Damage was done to a Fallert Bus Company school bus on March 22, when a tractor-trailer rig hit its left side at Interstate 55 and Highway 32.

No one was injured. One Ste. Genevieve R-II student was on the bus at the time, which was being driven by Noelani Mitchell.

Fallert Bus Company has provided bus transportation for the school district since its founding in 1953.

Michael “Buck” Jokerst, Fallert Bus manager, said that estimates had not been received for the bus’ repair. The bus is a 2009 Thomas.

Although minor fender-benders take place from time to time, the busses are not usually seriously damaged.

“It’s very rare that the bus ever gets any extensive damage,” Jokerst said, “because they are such a well-built piece of machinery. They’re built to be safe.”

This time the bus suffered significant damage to its side and is out of service until it is repaired – assuming it is not declared to be totaled. Jokerst had no estimate of how long the bus would be out of commission. He noted that “It’s tough to get parts,” which may slow the process.

According to Jokerst, the truck driver apparently stopped at the end of the southbound entrance ramp, then pulled onto 32, hitting the side of the bus just in front of its rear wheels, which was in front of him.