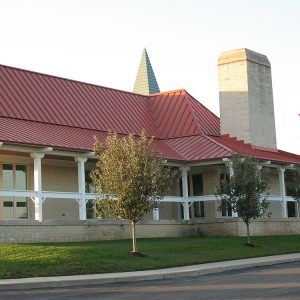 Replacing the roof on the original 2000 section of the Ste. Genevieve County Community Center will be no easy project.

It will not be a cheap one, either.

Four of the six contractors who met with county commissioners to examine the roof recently, submitted bids. All were above $600,000.

Presiding Commissioner Garry Nelson noted at last Thursday’s commission meeting that the commission has been working on the problem for over a year. In early 2021, strong winds ripped a portion of the roof loose.

The roof will have to be re-engineered. Nelson stressed that he wants it done right, “so it doesn’t start leaking within the next few years.”

“We want to do it right, so it’s good for the next 30 years,” First District Commissioner Karen Stuppy said.

The roof, designed to mimic the hipped roof styles of the French Colonial houses that made Ste. Genevieve famous, has had issues for years.

With oil prices rising to $3.80 a gallon, about 45 cents per gallon higher than last year, getting much paving work done will be expensive.

“The cost of fuel oil will definitely take a bite out of what we get done this year,” Nelson said. “But, we have to live with it. We have to be as efficient as we can.”

Later in the meeting, when Chris Meyer, a property owner on Coffman Road, called to ask why it has still not been paved, Nelson brought up the cost.

Nelson told him the road “is on our list for this year,” but that the oil price increases “have completely blown up” their plans.

Things were knocked off kilter in 2021, after a devastating winter in 2020-21 led to more winter road damage than usual. Some $375,000 had to be thrown into repair work that might have otherwise been used for paving new roads.

Nelson said that the first priority will be Charter Church Road, where needed tree removal and other work has finally been taken care of. Coffman Road will be the No. 2 priority.

Schmieder said he hoped to get started on Charter Church Road this week.

Meanwhile, Road and Bridge Foreman Scott Schmieder reported on price quotes he had received to repair the boom mower. Even with a 40 percent discount, the two pieces that need replacing would total $5,646.

Second District Commissioner Randy Ruzicka asked whether the six-year-old mower was worth fixing.  Nelson noted that it wouldn’t bring much in a trade-in for a newer one – if it would be accepted at all.

Nelson wondered how much more it would cost to really “beef it up.”

They agreed that they would speak to Pete Harnish, owner of Ste. Genevieve Tool and Welding, about possibly working on it. The commissioners and Schmieder agreed that Harnisch’s work on the Franklin Bridge was outstanding.

A discussion was also held on Boyd Road. The owners of Charleville Brewery and Winery had complained that their facility was inaccessible after heavy rains had damaged the road.

It would take a major overhaul to really solve the problem. Nelson said he has spoken to an engineer about the feasibility of raising the road about five feet.

If it were raised that much, with riprap added on one side to fight erosion, and six inches of compacted base laid down over the existing roadway, it should solve the problem.

However, the estimated price tag would be in the $3.4 million range, which is out of the question.