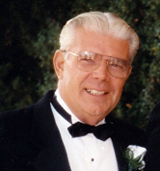 Alfred was in the US Navy. He enjoyed camping and grilling.