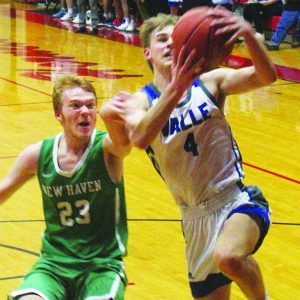 CRYSTAL CITY  —   Clayton Drury received the pass in the left corner, then drove the baseline to place what ended up being the district-winning jumper that brought his teammates and the Valle Catholic fanbase to an estatic celebration Saturday night.

Drury’s shot with 37.3 seconds left in the game put the top-seeded Warriors up for good against second-seeded New Haven after a seesaw matchup that had 15 total lead changes.

But the traditional state-powerhouse Shamrocks (14-14) were not going down without a fight as they launched two 3-point attempts, including one at the buzzer that rimmed out.

The Warriors (16-10) all jumped in the air with celebration on the court. It was their second straight district title and third in the last four seasons.

The game was close — the entire way as the largest lead was four points  —  twice by New Haven in the fourth quarter  —  keeping both proud fan bases on the edge of their seats throughout with plenty to say, good or not-so-good. Tempers flared on the court a few times as well from the physicality of play, but no major fouls were called. Every change in leads happened after the first quarter.

Valle now advances to the Class 2 sectional at Jackson High to face the Bernie Mules (26-1) at 7:45 p.m. Wednesday, March 2. The only way to purchase the $7 sectional tickets is online at MSHSAA.org.

The Mules are from a deeper part of southeast Missouri that plays the uptempo pace of hoops notorious with that region. They have won 17 straight games, including the District 3 title last Friday as the top seed over second-seeded Advance Hornets, 65-36.

Heberlie and Fallert both were selected to the C2D4 all-district tournament boys’ team.