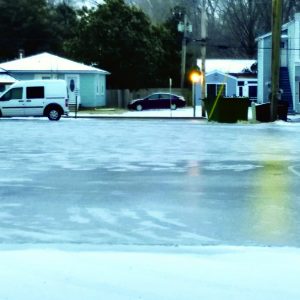 In yet another case of weather being bad, but not as bad as many forecasts had predicted, more winter moisture hit late last week.

Freezing rain and sleet last Wednesday left a sheen of ice over most surfaces, although streets in Ste. Genevieve were  kept passable.

Snow was expected on Thursday and a little did come – though less than an inch.

The combination, which frequently had sidewalks and parking lots more treacherous than actual streets and roads, was that many late-week events were cancelled.

Many businesses were also closed in the county.

By Friday, things were getting back to normal. That night, for instance, the Chamber of Commerce Winter Music Series went on as scheduled.

County road crews again used up all their salt, in working on the roads. More was expected to be delivered early this week.

“All this ice and the sleet and ice again, everything was pretty well shut down,” Presiding Commissioner Garry Nelson said on Saturday. “The road crew worked again today to try to get all the back roads clear for school Monday.”

“They did a good job again,” he said. “That ice is hard to get off the road.”