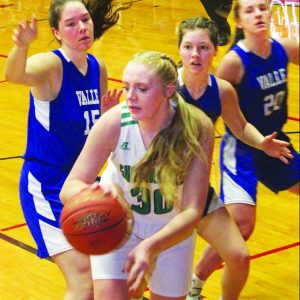 Turnovers, unfortunately, plagued the second-seeded Warriors (17-9) in the second half and they could not recover in the MSHSAA Class 2 District 4 girl’s championship game.

No stranger to one another, it was the third time in 15 years that the Shamrocks (15-10) defeated Valle for the district title.

This game was supposed to be played last Thursday, but area’s second major snowstorm pushed it to Saturday.

After a thrilling overtime semifinal victory last Tuesday, the Warriors, who saw their three-game winning streak snapped, gave the state-powerhouse Shamrocks a fit during the first half .

Then New Haven took over. A 7-0 run that began at the end of the first half and carried over to the third quarter provided just enough cushion for the Shamrocks, who have won three of their last four games, to eventually pull away.

Both teams were cold from the floor early on as neither team had scored just two minutes into the game. New Haven led 9-6 after one quarter and 13-11 at halftime.

The second half was a different story as Valle trailed 29-15 heading into the final quarter. Both teams committed just 27 total fouls and combined for just 15 free throws.