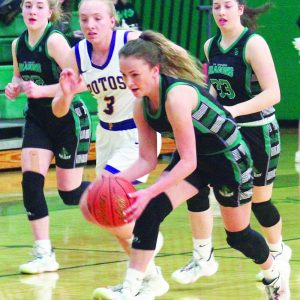 Ste. Genevieve’s Alli Byington comes up with a steal and takes off for a successful layup as teammates Kayden Huck (left) and Chloe Staffen (33) along with Potosi’s Kya Gibson pursue Saturday during the district opener. (PHOTO BY MICHAEL BOYD JR./Herald staff)

A rough performance from the free-throw line Saturday afternoon spoiled the host Ste. Genevieve Dragons’ upset bid of second-seeded Potosi during the opening round of the seven-team MSHSAA Class 4 District 2 girls’ basketball tournament.

Therefore, the seventh-seeded Dragons saw their season come to an end with a 52-39 loss to the Trojans at the Peggy J. Johnson Gymnasium. They previously held an 11-4 advantage just minutes into the second quarter, as well as a 20-19 lead at halftime.

The Trojans (16-9) later managed to take a 34-30 lead heading into the final quarter and used an 18-9 run down the stretch to thwart the Dragons, who finished the season losing two straight games after winning three in a row.

The Trojans, who have won four straight and six of their last eight games, advanced to the district semifinals to face third-seed Fredericktown Blackcats today (March 1).