Crossroads, one of the more popular local bands, will be the third of four groups to perform at the initial Ste. Genevieve Chamber of Commerce Music Series this Friday night at the Orris Theatre.

The group was formed in 2015 and has been active ever since.

“We span everything from Alabama to ZZ Top,” he said. “We have a tight rhythm section and just a really diverse music list.”

No hecklers are liable to yell, “Don’t give up your day jobs.”

Bennett is chief of police in Ste. Genevieve, while Leach owns Parkland Health Mart in Fredericktown, and Hoffman is an accountant in Farmington. Huffman, meanwhile, is a physical therapist.

Bennett said the group is excited to be part of the inaugural Winter Music Series. He praised the first two groups, Saints Til Friday and Southern Gypsi, as well as Dena Kreitler, chamber executive director, who coordinated the series.

“Both bands have done a great job,” Bennett said. “Dena has done a great job of putting everything together and advertising it. I think everybody is excited to have something to do with a winner. 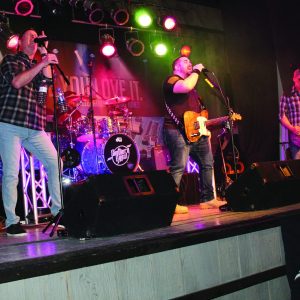 “And, of course the Orris is fantastic. Dick and Suzanne Greminger did all that remodeling and it looks fantastic.”

The new series mirrors the chamber’s popular Summer Music Series and provides an opportunity for a fun evening out during the winter.