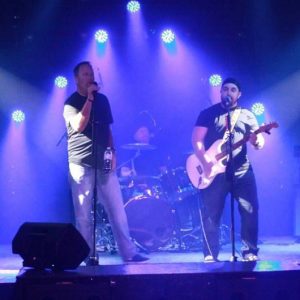 Southern Gypsi is the next band to perform in the Winter Music Series. The versatile group hits the Orris stage this Friday at 8 p.m. (Photo Courtesy of Southern Gypsi/Special to the Herald)

Southern Gypsi is one of the more eclectic bands taking the stage during the 2022 Ste. Genevieve Chamber of Commerce Winter Music Series.

The group, which includes local members, as well as St. Louis and Illinois residents, prides itself both in outstanding harmony and in a wide variety of music.

They play classic and contemporary rock and also older country up to today’s country hits.

Group founder Brian Boyer, who does vocals, one of the Ste. Genevieve natives, called the group “really diverse.”

“We’ll play everything from the older country to new country to classic rock to newer rock,” he said. “A little bit for everybody.”

The original version of Southern Gypsi was formed in 2012. Boyer said this is the third version of the band and “definitely the most successful version.” He said the group is building a fan base.

“We do have a good following,” Boyer said, “a very loyal following.”

“Sean is the youngest of the group, but is among the oldest of souls,” according to the group‘s Facebook page. “He is a father of three, and a combat veteran of the Iraq war. His influences include Post-Grunge Alt-Rock, and Pop-Punk. Sean’s musical inspiration comes from artists such as Soundgarden, Alter Bridge, and All Time Low.”

Chris Sweet, the other St. Louis resident, is on lead guitar. He grew up playing in various bands in Milwaukee, Wis. and Austin, Texas before moving to St. Louis. He and Boyer were in another band together for a while.

“Bringing his blues influenced guitar to the band, Chris became the final piece of the band that is Southern Gypsi,” the Facebook site says.

Mike Simpson, who does bass guitar/vocals, is from Evansville, Ill.

“After an extensive tour of Europe, Scandinavia and the Sub Continent, Mike ‘Simpy’ Simpson joined Southern Gypsi in 2019,” the Facebook site says. “Bringing a diverse background in all genres of music he and Drummer Scott DeRousse create a Tuetonic wall of rhythm that is a cornerstone of the Southern Gypsi sound.”

Boyer noted that one unusual feature of Southern Gypsi is that each member does vocals.

“We take a lot of pride in our harmony,” Boyer said. “The harmony is probably what people love about the band the most. Everybody in the band sings. That’s probably one of the most unique things about us.”