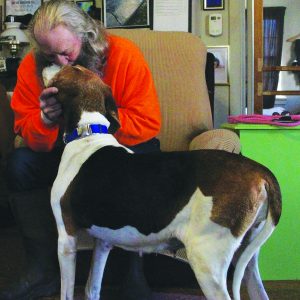 Happy endings are never guaranteed for stray animals. For Lucy a combination basset hound, yellow lab and Walker coonhound, it does appear that a “happily ever after” ending is being written.

Lucy, as Chelsi Montgomery named her, has captured the community’s attention both before and after her capture/rescue in late January.

After living on her own for some two years, Montgomery, and about a dozen others hatched a plan to stage an intervention for the aging canine.

“I’ve known that she was out and about for a while,” said Montgomery, an interpreter at the Felix Valle State Historic site and active member of the Foundation For Restoration of Ste. Genevieve. “But every time I’ve driven by or been in that area, I had never seen her before. There was a post of her on Facebook, showing her picture. I thought, ‘Well, we can put forth some effort. I think we can get this girl.’”

First she had to determine where to look. Among the areas most frequented by the mysterious canine were the Fourth Street and Seraphin Street area. Then came the job of convincing people in the area that catching the stray was in her best interest.

“I was actually met with some negativity on that and that spurred me even more to be honest, to want to save her,” Montgomery said. “I was able to get a small group together that was able to help in various ways. A lot of it was just moral support. And there were several people who were feeding her. I was trying to figure out what her area was, because people had said they had seen this dog all around town.”

Some reports even had her as far as the ferry crossing north of town.

“People started seeing her a lot, up there by the railroad tracks and those houses right by Seraphin and there had been a lot of reports lately of her having been hit or having a lot of close calls,” Montgomery related. “I was able to get within about 10 feet of her. She didn’t run. She hurried off, but she didn’t run. She didn’t show any signs of aggression, no growling, no barking, so that was a really positive moment for all of us. We realized it could be done. I had a very strong feeling that once we got her that we wouldn’t have any problems with her – that we would be able to slip a leash on her and lead her out of the trap. Believe it or not, that’s actually how it went.”