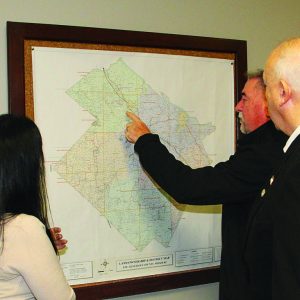 Although the change will not take place for another 11 months, District 116 State Representative Dale Wright brought his successor to meet officials at the Ste. Genevieve County Courthouse last Friday.

Wright, who has represented nearly all of Ste. Genevieve County since 2018, brought District 145 Representative Rick Francis with him, to meet the courthouse personnel.

Due to state redistricting, done every 10 years, Ste. Genevieve County will be moved into Francis’ district in January 2023.

Francis, from Perryville, spent more than 30 years as an educator, serving as teacher, coach, middle school principal and eventually superintendent of Perryville schools.

Francis will only be able to serve two years as the local representative before he will be term-limited out of office. He is in his sixth year in the State House now.

Wright believes Ste. Genevieve County residents will benefit from getting the more-experienced Francis as their rep.

“As I told some of the department heads, you may wind up saying, ‘Where has he been all along?’” he said. “He’s actually been a mentor to me and helped me so much in trying to try top make good decisions. He’s been a good friend and also a great legislator. You’re getting a tenured person in representative Francis.”

They met with County Clerk Sue Wolk and her entire staff, along with officials such as Circuit Court Judge Tim Inman, Circuit Clerk Julie Bova and her staff and others. All of the courthouse personnel were quick to thank Wright for the help he has provided since assuming office.

“It’s been great to be able to represent Ste. Genevieve County,” Wright said, noting that he still has nearly a year left to serve the county. “I still have a lot of work to do. The time here has been wonderful.”