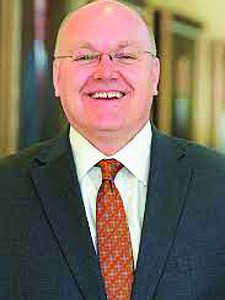 Roberts reflected upon is Valle Catholic education as the basis for his career in education.

“My experience at Valle Catholic was so important in my formative years,” Roberts said.

“I was blessed with great friends and dedicated teachers that cared,” Roberts added.

Roberts, the son of former Valle Catholic band director Gary Roberts, was a multi-sport athlete and also played in the school band.

What’s more, Roberts and his friends had a little rock-and-roll band called The Allies, and they played 1980s cover tunes during the 1980s. The Warriors competed at state several times while he was an offensive/defensive lineman.

Those experiences helped Roberts learn what it was like to be part of a team.

Roberts educational journey began at Southeast Missouri State University, before he transferred to the University of Missouri.

He earned a bachelor’s degree in chemical engineering from Missouri in 1990, and master’s and doctoral degrees in the same field from the University of Notre Dame in 1992 and 1994, respectively.

Roberts’ first job was at Auburn, and he instantly felt at home at the Southeastern Conference institution.

“I fell in love with the public school environment,” Roberts noted. He also took note of Auburn’s dedication to research across a broad curriculum spectrum.