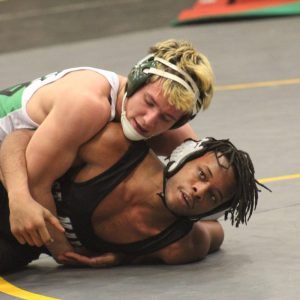 The Dragons took it all in stride — defending their district title in style with 236 points, which was 71.5 points better than host Sullivan.

“We came in focused after a good week of practice,” Ste. Genevieve head coach Jared Bonnell said. “We were excited.”

Bonnell was proud of how the Dragons battled through crowd adversity, and even overcame some sloppy performances early in the tournament.

In the end, the Dragons will be sending 12 wrestlers to the Missouri State High School Activities Association state meet set for Mizzou Arena in Columbia later this week.

Wiegand earned an upset victory midway through the tournament en route to defeating Deron Gipson of St. Mary’s (St. Louis) in the championship bout. Levi won with a 10-2 major decision, raising his season record to 23-12.

Ogden has been one of the classiest performers at 170 pounds, he recorded a 6-0 decision over Skyler Sanders of St. Clair. Ogden improved to 31-6 overall.

Gross, who joined the century win club earlier this season, was technically superb in a 16-3 major decision over Sullivan’s Dominic Ransom in the 132-pound championship. Gavin stands at 19-5.

Ryan Schmelzle (31-5) dominated the heavyweight division, recording the quickest fall of the entire event in a scant 0:13.

Other Dragons also stepped up, and advanced to state.

Karter Worley (106) reached the championship match in his weight class, however Luke Marlatt from St. James was just too tough with a 10-2 major decision.

Evan Winters, who exploded onto the scene at 138 pounds this season, nearly pulled off an upset. However, St. Mary’s (St. Louis) grappler Dominic Frederico earned a 9-8 decision.

Mason Langeneckert, who defeated teammate Zachary Flieg in challenge matches to compete at district, had an impact at 160. Langeneckert was third, pinning Wesley Cornell at the 3:11 mark.

Isaiah Basler (126) joins his older sister at state by virtue of a fourth-place finish. Justin Schwent also placed on the podium, fourth at 145, and Elijah Holifield was fourth at 195.

Now comes the hard part, competing at the state meet.

“I’m not going to mention names, but I think we can place six on the state podium if we wrestle well,” Bonnell said. It’s a matter of being successful in the quarterfinal round.

Bonnell is pleased to see the state meet return to Columbia after a year at Cable Dahmer Arena in Independence.

“Making the trip to Columbia is both special and nostalgic for me, and it’s a sign we are back to normalcy,” the coach noted.