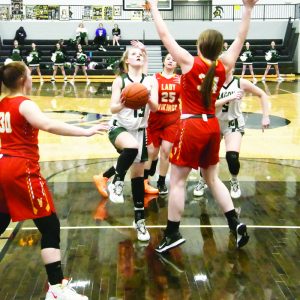 And such belief yielded a Mineral Area Activities Association consolation championship on Saturday as the Dragons outlasted Kingston, 43-36, in overtime at Potosi High School.

Ste. Genevieve and Kingston played an overtime game for the second time this season, and the Dragons came out on top this time around.

“I am super proud of the girls’ defensive effort (versus Kingston),” Ste. Genevieve head coach Jordanna Walk-Robison said. “They got a couple of big stops when it counted most.”

For sure, dangerous 5-foot-11 Kingston forward/guard Madison Nelson was kept in check to a season-low eight points.

“The girls always work hard (in practice), so it was nice for that hard work to pay off and win two in a row,” the coach commented. “Basketball is a long and grueling season, and I’m proud of the progress they made this past week.”

With the conference tournament so close to the playoffs, Walk-Robison said the recent event will help prepare the girls mentally for what’s ahead.

“It gives them a taste of pressure situations,” the coach added.

Ste. Genevieve stands at 4-17, with three more games to go — all at home — St. Vincent last night, Festus on Thursday and Perryville on Feb. 21.

The Dragons reached the consolation championship by virtue of Wednesday’s 67-40 victory over Valley Caledonia, which included a season-high point total.