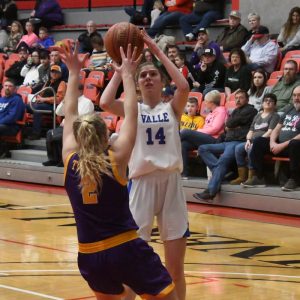 PARK HILLS — When Valle Catholic’s Mia Weiler sank a 3-pointer at the 2:58 mark of the fourth quarter, the Warriors drew even with Potosi at 48-all.

However, Potosi’s Carley Hampton answered with a 3-pointer of her own and the Trojans finished the game on an 11-4 run in a fifth-place semifinal at the Mineral Area Activities Association tournament on Friday at Bob Sechrest Field House.

See, the Trojans nipped the Warriors in overtime, 44-43, during a regular-season game back on Dec. 16. Valle Catholic had the lead in that game, until Potosi went ahead in the final minute.

“Our girls handled their pressure well the first game,” Bauman noted. “But, this time, they got to us.

“Despite struggling protecting the ball all game, we began chipping away and before long our girls had hope again,” Bauman continued. “For me, it was quite an accomplishment to see our resiliency.”

Valle Catholic (14-7) ultimately placed where it was seeded for the MAAA Tournament, sixth spot. It’s a matter of playing cleaner, paraphrasing Bauman.

Like the first game in December, the Trojans and Warriors played a physical contest — featuring 38 fouls, 32 free throws made and 63 free throws attempts among the eye-popping numbers.

Kalie Thompson gave Potosi its largest lead of the game at 46-33 with 48.2 seconds remaining in the third quarter.

But, in the end, the Warriors reached the crest of comeback only to slip and fall by three possessions.

The Warriors have drawn the second seed for the forthcoming Class 2 District 4 Tournament, playing Valley Caledonia (1-17) at Crystal City High School. Tip off is Saturday at 1:30 p.m.