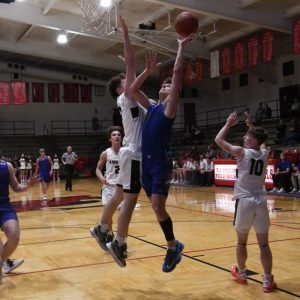 Still, there were many positives to come out from the tournament.

Valle Catholic defeated Kingston for the second time this season. The Warriors played competitive games against schools with larger enrollments in Potosi and Farmington. And Sam Drury eased back into the team’s rotation — with success.

Despite not getting over the hump versus Farmington, Valle had many strong possessions against a class group. Valle Catholic had control versus Potosi until the Trojans seized momentum late during the fourth quarter.

Farmington also cashed in from the free-throw line to the tune of 10-of-16 attempts (64 percent).

Carson Tucker stole a Farmington pass and converted a lay-up, followed by Chase Fallert making good on one of two free throws.

The Warriors were down 60-55 with 3:42 remaining in the fourth quarter. However, Farmington outscored Valle Catholic 10-4 the rest of the way.

No individual statistics were available from the Farmington game as of this press run of the Ste. Genevieve Herald.

Valle Catholic has been given the top seed and a first-round bye for the Class 2 District 4 Tournament beginning Saturday at Crystal City High School.

Search said the tournament served as a stern test because the competition prepares the Warriors well — taking the same approach during the upcoming playoffs.

The Warriors will face the winner of the first-round game between Bismarck and Valley Caledonia on Wednesday, Feb. 23.