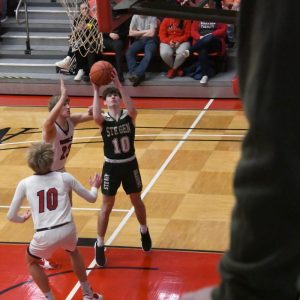 PARK HILLS — Feels like the first time. Because it is.

This was one day the Dragons topped top-seeded Central, 64-61, in the same venue, marking one of the few times Ste. Genevieve beat the Rebels and Raiders in back-to-back games.

“It’s great for our boys,” Ste. Genevieve head coach Robert Coleman said. “It just shows how all their hard work, determination, preparation and believe in each other is paying off. It’s great for them they can be a part of something.”

Coleman stated winning the conference tournament came down to defense and rebounding.

“I think our guys won the rebounding battle in both games,” the coach commented. “Our defense still made stops when we needed to.”

Those free throws meant Central could only force the game into overtime with a 3-pointer. However, Ste. Genevieve’s man-to-man defense forced an errant 3-point attempt and the Dragons earned the win.

“They got a shot off, but we felt like it was a tough one, and we were lucky enough they missed,” Coleman said.

In the win over North County, Ricky Hunter dropped in 25 points and senior role player Blake Morganthaler came through with 12 more.

The Dragons connected on 23-of-42 field goals (55 percent) while holding North County to 19-of-51 shooting (37 percent) — the main reason why they prevailed.

In the victory over Central, Hunter tallied 23 points including a pair of 3-pointers and a stellar 7-of-9 from the free-throw line. Boyer added 14 points and Rudy Flieg 13, including a rare 3-pointer.

The Dragons outscored the Rebels 20-12 during the fourth quarter, and seniors Klayton Squires, Thomas O’Brien, Wesley Basler and Morganthaler all made key contributions in the victory — making the moment all the sweeter.

Morganthaler had two steals and two pass deflections as part of the Dragons’ defensive effort.

Ste. Genevieve has three regular-season games remaining, including “Senior Night” versus Herculaneum this past Monday, at Kelly (Feb. 17) and at Perryville (Feb. 24).

With the playoffs beginning in roughly three weeks, the atmosphere inside “The Bob” should only help the Dragons conquer future pressure points.