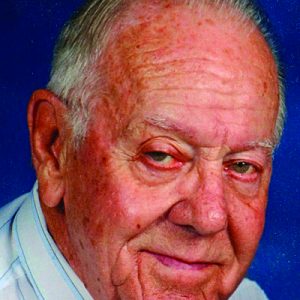 He was born April 28, 1932 in Brickeys, MO, the son of Dorothy (Pinkley) Eisenbeis and Russell Reed who both preceded him in death.

The Clergy was Rev. John Schneider and Deacon Jim Basler.

Burial for Don as well as his wife, Mary Ann, was at St. Agnes Cemetery in Bloomsdale, MO following the Mass.  Graveside military services were performed by VFW Post 2210.

Memorials can be made to St. Agnes Parish where Don has been a parishioner for over 60 years.

Don grew up in Brickeys, MO along the Mississippi River. He was an avid fisherman and enjoyed fishing with his dad.

He served in the US Air Force during the Korean War. He was assigned as a mechanic to the Strategic Air Command with the 447th Bomb Squadron.

Before and after the service, he worked at Pittsburgh Plate Glass. He later joined McDonnell Aircraft as a mechanic on the flight line and worked on the Gemini and Mercury projects.

He decided he wanted to be his own boss and purchased the family business known as the Dew Drop Inn in Bloomsdale, MO. It was a local watering hole where you could get a juicy burger, a good cup of his homemade chili and a cold Stag on draft.

He enjoyed airplanes, Nascar, hunting, fishing, and gambling (especially playing poker with the priests). After retirement, Don and Mary Ann would play cards every day with their morning coffee. They enjoyed watching game shows together like Jeopardy and Wheel of Fortune. He was St. Louis Cardinals fan and rarely missed watching a game.

Don was a member of Bloomsdale Knights of Columbus, and the American Legion Post 554.

He also spent many years as a volunteer with the Bloomsdale Volunteer Fire Department. Later in life, along with his wife and friends, he helped with funeral lunches at the KC Hall.

He was a devoted husband and father. He loved his children and grandchildren and has enjoyed watching them grow up. The family has many happy memories hunting, and fishing at his pond. Don was especially excited about being promoted to Great Grandfather a few months ago.