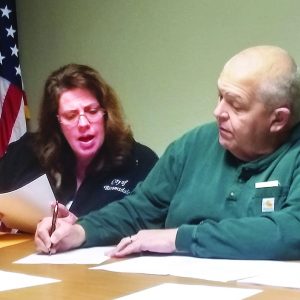 Like most of their recent meetings, the Feb. 8 Bloomsdale Board of Aldermen meeting was dominated by the upcoming waterline and tower project.

David Van Leer and T.J. Garbs of Cochran Engineering were again present to update the officials on progress of the $1.9 million project.

Van Leer reported that both contractors had submitted insurance and bonding information. Vern Bauman Contracting is doing site work for the 250,000-gallon water tank, while Phoenix Fabricators and Erectors, LLC, is constructing the tank.

A pre-construction meeting will be set up with the contractors.

Monia discussed easements with the Cochran reps. As the project moves into its later stages, some streets will need to be widened, requiring easements from property owners. He noted that the easements will stick as close to the roadway as possible and that, due to current city set-back ordinances, no portion of an owner’s property would be impacted that could have actually been used for anything. That and the fact that the project itself will be providing a much-needed service to the community, makes the mayor confident that there will not be any trouble getting easements to do the needed work when the time comes.

“We’re only looking out for the future of the city,” he said.

Randoll read him a letter she will be sending to property owners affected. Monia said it was “well-written.”

That issue will not come up for quite some time.

For the water mains to transport and distribute the water from the tank, Van Leer said last fall that he would hope to see a notice to proceed issued by May 1, with a July 5 target date for completion.

The tank part of the project would see plans going out to contractors Nov. 1 of this year, with a bid opening in December. The bid opening would be about Dec. 14. The target date for the notice to proceed would be March 1, with a completion date target of Nov. 13, 2022.