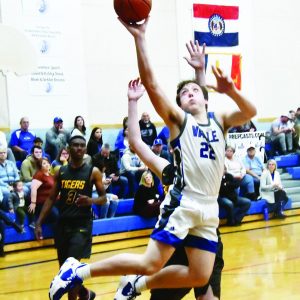 After two straight overtime games, you may forgive the Valle Catholic High School boys’ basketball team for such a slow start versus Arcadia Valley on Tuesday, Feb. 1.

Arcadia Valley rolled to a 29-20 intermission lead before the Warriors — slowly but surely — rallied for a 64-56 victory in front of the blue-and-white clad home folks.

Valle Catholic has won five straight games dating back to Jan. 24 versus Valley Caledonia. During the run, the Warriors have wins over Jefferson R-7, 63-50, Kingston 64-61 and St. Vincent 70-64.

“Arcadia Valley did a good job of coming out focused,” Valle Catholic head coach Tyler Search said. “They tried to take out offense out of sync and did a pretty good job offensively in the first half.”

Search said it was a matter of Valle Catholic playing much better defense in the second half — and that’s exactly what they did.

“I knew our guys were running low on gas (after the overtime win versus St. Vincent), but they fought through it and found a way,” Search noted.

What’s more, Search said playing in so many close games lately only will help the Warriors — especially with the Mineral Area Activities Association conference tournament this week and the postseason beginning in less than three weeks time.

“It’s good to have experience in those types of situations,” the coach commented.

Late in the third quarter, Chase Fallert stole an Arcadia Valley pass and delivered a crisp pass to Carson Tucker.

In turn, Tucker drew a foul and completed a traditional 3-point play, giving Valle Catholic a 43-39 lead at the end of three quarters.

Fallert then scored along the baseline to open the fourth quarter as part of this bookend moment, and suddenly the Warriors were ahead by six.

Arcadia Valley managed to stay within one possession of Valley Catholic throughout the first few minutes of the fourth.

However, Jackson Dement missed a runner. Michael Okenfuss grabbed the subsequent rebound and moments later scored on yet another Fallert assist.

Aiden Heberlie, the game’s leading scorer with 25 points, Fallert and Tucker converted needed free throws down the stretch and Arcadia Valley faced a five-point deficit or greater the rest of the way.

Overall, the Warriors canned 10-of-13 free throws in the fourth.

The Valle Catholic junior varsity team took control of the game in the third quarter en route to a 48-42 victory over Arcadia Valley.