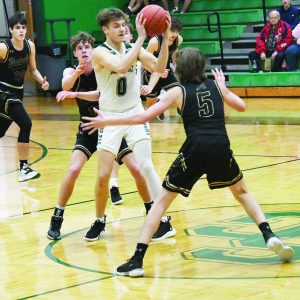 Ste. Genevieve’s Rudy Flieg (0) finds himself surrounded during a game from earlier this season. The Dragons have a first-round MAAA Tournament bye. (FILE PHOTO BY ERIC VICCARO/Herald staff)

After all, horrible weeklong weather forced the complete cancellation of the 2020-21 tournament.

However, roads were clear enough by Monday to begin this year’s installment of the MAAA Tournament.

On the girls’ side, Ste. Genevieve (2-16) was seeded eighth, and they were scheduled to face Arcadia Valley (3-15) Monday at Farmington High School.

However, Walk-Robison noted a bright spot.

“It is nice for the girls to get to play in the Mineral Area College gym,” she said.

given the seventh seed and was slated to play Kingston (11-8) in a first-round game — also Monday at Farmington.

Earlier this season, the Warriors defeated Kingston in a pair of heart-stopping thrillers. These games have been quite competitive.

“We’re looking forward to competing in the MAAA Tourney,” Valle Catholic head coach Brian Bauman said. “We’d rather see someone new to start the tourney; however, we get to square off with Kingston for a third time this year.”

Bauman said it will be a challenge trying to knock off Kingston for the third time in one season.

“It’s a challenge that I hope our girls are ready and willing to tackle,” Bauman said. “Nearing the end of the season, the girls are understanding their roles and responsibilities more than before, so it will be exciting to see how far that will carry us.”

Valle Catholic’s boys, seeded sixth with a record 12-7, were set to face Valley Caledonia (10-9) at 8:30 p.m. on Monday evening at Bob Sechrest Field House on the Mineral Area College campus.

Since all three of those games took place on Monday, recaps from them will not be available until the Feb. 16 edition of the Ste. Genevieve Herald.

The event proceeded as scheduled on Tuesday, with girls’ quarterfinals. Semifinals are scheduled for Thursday and the girls’ championship at 5 p.m. Saturday. The third-place game is set for 2 p.m. that day.

On the boys’ side, games were scheduled for MAC and Central High School in Park Hills. The championship game will be at 6:30 p.m. on Saturday, with the third-place game at 3:30 p.m. the same day at Sechrest Field House.

“I am looking forward to the conference tournament,” Valle Catholic head boys’ coach Tyler Search said, “and I think our guys are as well. It is good to get more games under our belt, and hopefully it will prepare us for the postseason.”

Ste. Genevieve’s boys drew a first-round bye, and they weren’t scheduled to play until Tuesday night versus either Potosi or Bismarck.

“It’s nice,” Ste. Genevieve head coach Robert Coleman said. “It lets us know we were in the top four, and we did something right during the regular season.”

The Dragons could face Potosi for a third time this season. Should Ste. Genevieve advance to the semifinals, it may get another crack at Park Hills Central.

Coleman said he’s happy to have a tournament this year. The boys have been able to practice a couple of times since in the aftermath of last week’s winter storm.

Tournament admission prices are $4 for adults and $2 for students, as reported by Ste. Genevieve R-II athletic director Dr. Jeff Nix.