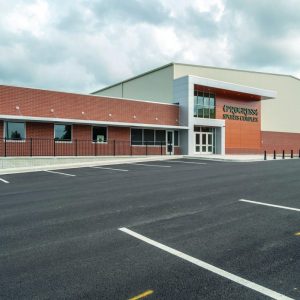 Progress Sports Complex on Missouri State Highway 32 has been named the host site for the Class 1 District 1 wrestling tournament set for this Friday and Saturday. (SUBMITTED PHOTO FROM THE STE. GENEVIEVE COUNTY COMMUNITY CENTER/Special to the Herald)

For the first time ever, the Valle Catholic High School wrestling team will serve as host for the Class 1 district tournament.

The Class 1 District 1 tournament will begin at 5:30 p.m. on Friday, and the entire event will take place at the Progress Sports Complex.

“I think it’s an awesome opportunity to host the district tournament,” Valle Catholic head coach Jacob Gegg said. “The boys will enjoy the large crowds that come out to watch. As the saying goes, ‘There’s no place like home.’”

Gegg said having the tournament here in Ste. Genevieve will serve as a source of motivation.

The Warriors won’t endure a long drive somewhere else, and they won’t need to fork over money for hotel rooms.

Hey, isn’t it nicer to sleep on your

There will be plenty of talented teams at the tournament, including North Callaway — a school Gegg has seen and scouted this season.

“I believe we will also be a player in the team race,” Gegg said. “We have some guys that have had great seasons, and they look to continue that for the next two weeks.”

The top four wrestlers in each weight class will advance to the Missouri State High School Activities Association state meet from Thursday through Saturday, Feb. 17-19, at Mizzou Arena in Columbia.

The most wrestlers Valle Catholic has ever qualified for state in a single season is four — but, the Warriors could establish a new benchmark this year.

Josh Bieser spearheads the group in the 152-pound weight class, fresh off a second-place finish in a lower weight class last year.

This marks the second straight year the city of Ste. Genevieve has served as a host for a postseason wrestling tournament — with the Dragons serving as a Class 2 site in February 2021.

Kuehn had the Warriors’ quickest pin versus St. Mary’s, pinning Chris Concepcion in just 39 seconds in a 120-pound bout.

The Warriors had been scheduled to face Gateway Science, Lutheran South and Roosevelt.