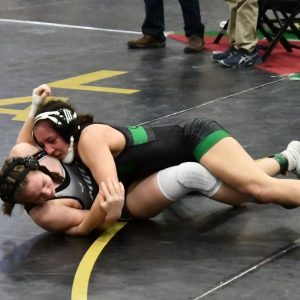 Basler won two matches to reach the semifinals — before she suffered a 4-2 decision against her versus Talia Lee from Webster Groves — at the Missouri State High School District 1 Tournament.

Earlier in the event, Basler pinned Kirkwood’s Cameron Fort in 1:07, and she followed that up with a pin in 0:55 Breann Thrasher from Poplar Bluff. Basler improved to 27-6 during the 2021-22 season.

“Izzy’s going to have her ‘blood match’ right out of the gate Monday,” Ste. Genevieve head coach Jared Bonnell explained. “She has to win that match in order to lock in her position at state. She had a tough semifinal match, and learned from it.”

First- and third-place matches were scheduled for Monday evening. Only Nadia Middendorf from Parkway South and Lee were locks to be state qualifiers, with two more spots up for grabs at 125 pounds.

Basler was scheduled to face Maddie Johnson from host Lafayette in what was expected to be a taut consolation semifinal.

The tournament was moved from Friday and Saturday to Saturday and Monday due to poor road conditions stemming from last week’s major winter storm.

Katlynn Lay, at 130 pounds, pinned Ella Bingman of Hillsboro in 3:17 before she was eliminated by Jackson’s Karissa Hodges on a 5-1 decision.

Lay (21-12 season record) wrestled Hodges much better than she did at the Southeast Missouri Regional Wrestling Conference Tournament two weeks prior.

Addison Geiler (141) needed just 0:21 to pin Izzie Rigueiro of Parkway South before Windsor’s Kennette Way eliminated Geiler in a later consolation round (pin, 2:54). Geiler finished the season with a 15-11 record.

Other Dragons made a memory by simply competing at the district meet: Zoe Cook (115) and Hailey Wheeler (135). Cook reported out for wrestling this her senior year, and she compiled a record of 17-13.

The district featured more than 50 schools, and Lafayette’s gymnasium was packed to the gills with spectators, wrestlers, coaches and volunteer workers.

It’s all a matter of MSHSAA finding additional venues for both district and state tournaments.

• Paityn Basler, who normally wrestles for Ste. Genevieve at 110 pounds, was unable to compete at districts due to an unspecified injury.

• Ste. Genevieve wrapped up the regular season on Tuesday, Feb. 1, with a 36-16 victory over Farmington. The Dragons won the dual because they filled more weight classes.