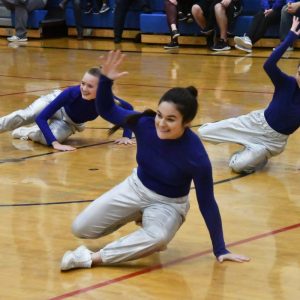 FARMINGTON — The Valle Catholic Dance Line embarked on its maiden voyage into competition at the Farmington Invitational on Saturday, Jan. 29.

So, how does a dance competition actually work?

“In each of the categories, we are scored against a score sheet worth 100 total points,” she said. “Depending on what style of dance is being scored, the criteria is different.”

Three judges score each routine, and those numbers are averaged together for the final results.

Valle Catholic finished fourth out of eight squads in Class 1 at the event, which took place at Farmington High School.

The Dance Line scored an 85 in both the jazz and hip hop categories.

“I was absolutely thrilled with our results,” Gegg said. “Judges typically score really hard in the jazz and lyrical categories because those styles are so technical.”

Gegg said she didn’t know what to expect since this was truly Valle Catholic’s “first rodeo,” so to speak. But, she was totally satisfied with the outcome.

“This team has worked so hard this season, and has sacrificed a lot of their time to learn these routines and drill them over and over again.”

Performances may last about two minutes in duration.

But, these memories the girls made will last a lifetime.

The atmosphere for the invitational was welcoming and supportive, and that helped remove some of the anxiety of actually competing.

egg called the experience “eye opening,” and gave the girls exposure to what other dance teams are using for routines and dancing styles.

“It gave them the opportunity to compare their abilities to other teams in positive environment,” the sponsor commented. “We loved this competition.”

Gegg said the Dance Line would like to compete in more than just one event during the 2022-23 academic calendar.

The group had one final performance during halftime of the Valle boys’ basketball game on Tuesday, Feb. 1.