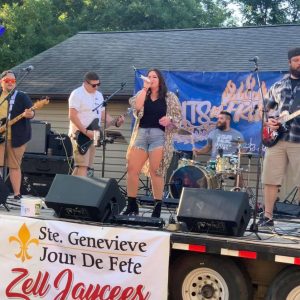 Local band Saints Til Friday will kick off the Ste. Genevieve Chamber of Commerce’s new Winter Concert Series on Feb. 18.

The band formed in July 2016, so its fifth anniversary is coming up.

Saints Stil Friday has an eclectic repertoire, with a little something for every taste.

Kemper, Papin and Mueller had been together since 2009, with different singers. In 2016, they found Fischer.

“After messaging her on Facebook one time, I saw her sing the National Anthem and she was really good,” Mueller said. “We were in a transition period of trying to get a new singer and she came out for us and we’ve been a band ever since.”

Puckett was the final piece of the puzzle, joining the group as a bass guitarist about a year ago.

Mueller described the band as “just a bunch of random people that work all the time and formed a band to have some fun.”

He said that Kemper “randomly” came up with the name “Saints Til Friday.”

The band’s first gig was in Cape Girardeau at a Howard Ashlinger benefit, which the band does annually, to support Special Needs athletes.

They have played several venues in Cape and have frequently played the Dew Drop, Midway and Crown Winery in Ste. Genevieve County, “pretty much everywhere local,” Mueller said.

This will be their first time on the historic Orris Theatre stage, however. That makes being the Winter Music Series’ leadoff band even more of a thrill for them.

“It’s pretty exciting for us,” Mueller said. “We’ve never played at the Orris, actually. That’s kind of one we’ve tried getting into, but never have been. So it’s pretty cool to open it up for everybody.”

Mueller expects to see a packed house with people enjoying themselves next Friday night.

“We usually bring our own crowd,” he said. “We have a fun time. I think our stage presence is pretty awesome. Like I said, we just want to have fun with everybody and see people having fun.”

Following Saints Til Friday, the series continues with Southern Gypsy on Feb. 25, Crossroads on March 4 and Sweet Water Holler on March 11.

To purchase tickets in advance, visit www.SteGenChamber.org or go to the Chamber office at 51 S. Third Street.

Just like with the Summer Music Series, the Herald will be raffling off two free tickets to each performance. Just cut out or copy the entry blank below and drop it off. A container will be on the front counter of the Herald office for the entries.

A winner will be drawn by 3 p.m. on Wednesday, each week and the winner notified by the next day. He/she must pick up the tickets by 3 p.m. on Friday.