Safety first was the idea when the Ste. Genevieve County Commission closed the courthouse Wednesday through Friday last week.

“Our theory was, we’d rather keep people safe,” Presiding Commissioner Garry Nelson said. “Taxes weren’t due or anything, so we left it up to the individuals, if they wanted to come in and work. We left it up to the office-holders. Their people could stay home and use a vacation day, or they could come to work. 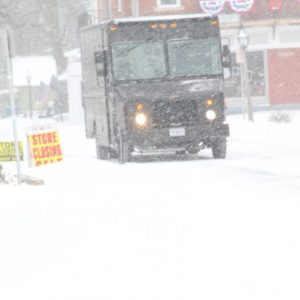 “We were closed to the public for liability reasons. It was so cold, you couldn’t get that ice off the sidewalk.”

Nelson said he and Associate Commissioners Randy Ruzicka and Karen Stuppy agreed with the assessment.

“We all three felt it was better to err on the side of caution,” Nelson said. “We had people coming from Staubtown and out 32 and north of Bloomsdale and all over.  They kept saying stay off the roads if you don’t have to be, so we kept it closed. We’ll get some backlash on it, but you’ve got to make a decision and live with it.”

Meanwhile, Scott Schmieder, road and bridge foreman, had to tackle the county roads as first ice, then continuous snow hit.

The road crew exhausted the on-hand supply of salt. Another shipment was expected to arrive this Monday.

“We put our last load of salt out, so we’re out of salt,” Nelson said on Saturday.

He explained the difficulties the road crew had in dealing with the weather conditions.

“We mix it with chips because when it gets down to single digits, salt doesn’t activate and needs a little liquid to active and gets a little heat on it,” he said. “When the sun comes out like it did yesterday (Friday), we’ve got snow plowed on the edges of the road, then it starts melting, there’s nowhere for the water to go. It goes up then it freezes over night, then it’s pure ice. It’s just not a good situation. We try to keep the road salted with chips, and then we’ll come back the next week, going more off the right of way, to get a wider swatch. The main thing was to keep it open now. It’s a damned if you do, damned if you don’t. If you go too far out, it shoots the salt and chips into people’s yards and kills the grass. If you don’t get it off, it just keeps the water running down the road and freezing at night.”

The fact that the snow kept coming down without stopping for so long, added to the difficulties.

”With this, it just kept snowing,” he said. “Usually, around here, we get snow for three or four hours, then you go blade it off. Well, it just did not stop. It didn’t come down real fast, but you just gad t keep going over and over it.”

Nelson believes the new shipment of salt should see the county through the rest of the winter.

“We’ll be ready if we get another streak,” he said.  “A couple of more weeks and we shouldn’t have to worry.”