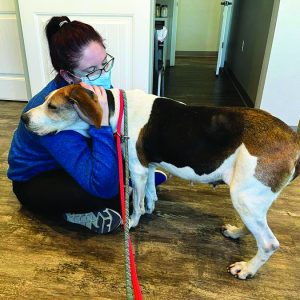 For some two years no one was able to capture an abandoned Treeing Walker Coonhound that was seen about town.

Although friendly, she avoided capture until Chelsie Montgmery led an intervention to get “Lucy,” as she is now known, off the street.

“We had an amazing group of about 12 people, counting Officer Barton of Animal Control, who came together in various ways to make this rescue possible,” Montgomery posted on her Facebook page. “Lucy (as we are calling her), is adjusting well to rescue life. She enjoys love and affection, she spent yesterday afternoon sleeping on a couch, and spent last night sleeping in a bed.”

Montgomery has found Lucy to be very affectionate and sociable.

“You would never know this is the same dog that has been avoiding humans for the past two years,” she said.