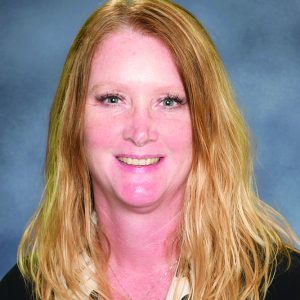 Flieg, a Ste. Genevieve High School graduate who has been with the district since being hired as a middle school business teacher in 1996, sent out a letter last week, making the announcement.

“After much contemplation and discussion with Jason, my husband, I have made the decision to retire with an effective date of June 30, 2023 (a year and a half from now), and I submitted my letter to the board during the executive (closed) meeting this past Tuesday evening. This decision is primarily based on my need to be able to ‘be there’ for Jason, our four children, our parents and, now, our beautiful granddaughter,” Flieg said in the letter, which she also read aloud to the board.

At that Jan. 18 board meeting, the board had approved the creation of a new position, “deputy superintendent.” In the closed session, Dr. Paul Taylor, assistant superintendent, was given the new title.

She got her doctorate at Missouri Baptist University in 2014, then became assistant superintendent.

“I am extremely proud and humbled to have been a part of this great school district and to have had a hand in the progress that we have made throughout my employment,” Flieg said. “I was always most proud to share with others that our Board members make decisions that are in the best interest of kids. I am excited to continue this focus throughout my last year and half with the district and look forward to watching it continue into the future.”

Flieg battled emotions, sharing the information with the board.

“Ste. Gen. R-II has been an integral part of my life for 42 years,” she said, noting that since she had Bonnie Zerwig as a kindergarten teacher, she had been “blessed with amazing teachers and support staff … who helped guide me to help find my calling in life.”

She named several who helped and had special praise for the late Mikel Stewart, former principal and superintendent, who hired her and promoted her nine times. She also credited her husband for his continued support.

Flieg expressed confidence that continuity will be achieved as Taylor is groomed to take over.

“Throughout the training and transition period, the deputy superintendent will, over time, assume the responsibilities of the superintendent.”

Taylor, who had been middle school principal before being promoted to assistant superintendent upon Flieg’s ascendency into the superintendent position, would then take Flieg’s place in August 2023.

All Three Requests For Adjustment Get Approval