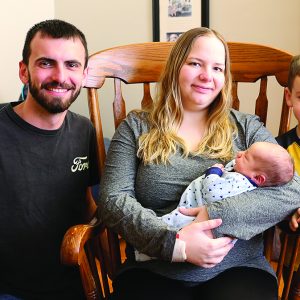 Wyatt Klein, the first baby born at SGCMH in 2022, is seen with parents Grant Klein and Angie Schwartz.

Wyatt is one of southeast Missouri’s newest citizens, and his family was awarded the “First Baby of the Year” sponsored by local area businesses and the hospital.

Parents Angie Schwartz and Grant Klein were thrilled about their new baby boy being the first of the new year.

“The process went so smoothly, and the excitement continued after learning we won the New Year baby promotion,” Schwartz said. “We’re overjoyed with all the love and special care.”

Grant Klein said he looked forward to going home to see how Wyatt is greeted by his four-year-old brother, Hunter, at home. Hunter also briefly visited the hospital to see Wyatt as well. Both children were born at SGCMH.

Schwartz, and two grandparents, Fred and Karen Schwartz, all work at the hospital.

The family was showered with gifts from the hospital as well as merchants from Ste. Genevieve and the surrounding area.