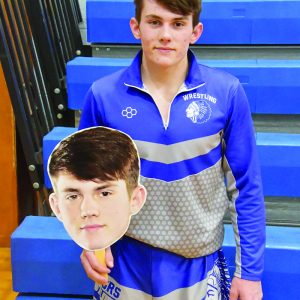 Bieser, with a late first-period pin over Landon Sprous, recorded the 100th victory of his scholastic career.

“It’s a testament to his (Josh’s) hard work and dedication to be able to improve to the level he is today,” Gegg added. “Josh will also most likely become Valle’s all-time wins leader by the end of the season, adding to his list of school firsts and records.”

Last week couldn’t have been scripted any better for the rest of the Warriors, too, with three relatively easy dual-match victories over Central on the road (51-6) and Potosi (66-6) and Maplewood-Richmond Heights (54-12) in last Thursday’s home triangular.

Gegg said he’s pleased with the Warriors’ depth, and he noted that wrestling has the most starting positions (14) in any high school sport outside of football.

The Warriors have used the “team approach” to winning duals, aiming to obtain six points for every match. What’s more amazing, Valle’s boys’ enrollment is about 60.

“Our wrestlers have done a great job of recruiting kids at our school in coming out for wrestling,” Gegg added.

In the match versus Potosi, Noah Elbert recorded the Warriors quickest pin in 0:20 over Michael Chavosky.

Wil Kuehn (120), Flieg, Rowles, Calbreath and Elbert all were victorious by fall versus Maplewood-Richmond Heights. Elbert and Kuehn recorded pins in 0:41 and 0:42, respectively. Clanton won on injury default.

Kaden Gegg won a pair of matches at 106 pounds, oftentimes the hardest weight class to fill.

Valle Catholic is off this week, and won’t wrestle again until a triangular on Jan. 25 at New Madrid County Central with Kennett.

Gegg said he’s looking forward to uninterrupted practice time this week, giving wrestlers plenty of time to improve as the Warriors enter the final push in the 2021-22 season.

On Jan. 28-29, the Warriors will compete in the Bob Georger Classic at DeSoto High School.