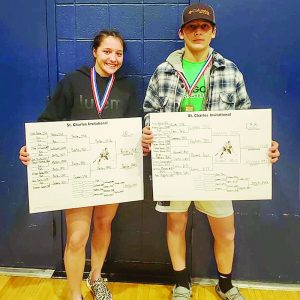 (From left) Ste. Genevieve’s Isabel Basler and Evan Winters won their respective genders’ weight classes during the St. Charles Tournament last Friday. The tournament was condensed to a one-day event. (PHOTO BY KATY BASLER/Special to the Ste. Genevieve Herald)

The tournament was pared down from a two-day event to one due to forecasted poor weather this past Saturday.

The Dragons made the most of limited wrestling, taking third out of 24 teams on the boys’ side and seventh out of 20 schools with girls’ teams.

“We wrestled fair,” Ste. Genevieve head wrestling coach Jared Bonnell said. “I still feel like we are making the same mistakes in most of our matches.”

Bonnell said the Dragons’ approach and preparation didn’t change with a one-day format.

Winters captured gold in the 138-pound weight bracket, which included a thrilling third-period pin over Holt’s Boston Howard (5:51 time of the fall).

He also recorded a 12-9 decision over Poplar Bluff’s Jakob Hopkins, and a pair of first-period falls against Alvaro Garza of Chaminade Prep and David Dunn of Pattonville.

“Evan had one of his better matches of the year in the finals,” Bonnell noted. “he controlled every aspect of that match. He has been very competitive this year, and seems to have the drive for success.”

The freshman has put years into becoming a top-notch grappler, and that’s the main reason for Winters’ great fortune — resulting in a 23-4 individual record.

Poplar Bluff’s Logan Ringstaff, who already has 30 wins this season, recorded a 4-2 decision in the finals. Schmelzle still improved to 16-3.

The Dragons fared exceptionally well in the two lightest weight classes as well, with Karter Worley (16-10) placing second at 106 and Bryant Schwent third at 113.

Liam Borgsmiller pinned Worley in 0:39 in the championship bout; however, Karter still won one match by pin — in 3:24 over Jack Pecoraro of Priory followed by a 13-6 decision over David Yates of Wright City.

Schwent improved to 16-3 on the season, recording a 9-8 decision over Carter Barnes from Troy Buchanan to reach the bronze-medal match.

Isabel Basler pinned Allison Basta of Pattonville at the 1:28 mark of the 130-pound championship bout.

Basler also pinned Zoe Beattie of Holt in 5:21, improving her record to 14-3 this season.

“I think Wonder Woman shook her up in a good way,” the coach commented. “She has been a great leader for the team this year.”

Basler settled for fourth, but she won two matches by fall — including one in 0:23 over Winter Lusk of Pattonville — in raising her season record to 14-6.

The girls’ and boys’ tournaments will take place over the course of Friday and Saturday at Poplar Bluff High School.

“The SEMO conference tournament is loaded,” Bonnell said. “It would be a tall order to win it, but there is always a chance for both teams. More appropriately, we need to improve on reducing the mistakes we’ve been making in our matches, and take more chances.”

Earlier in the week, Ste. Genevieve’s boys defeated host Sikeston and Windsor at a quadrangular, with the Dragons’ lone loss to Jackson.

The girls swept all three of their opponents, Sikeston, Jackson and Windsor.