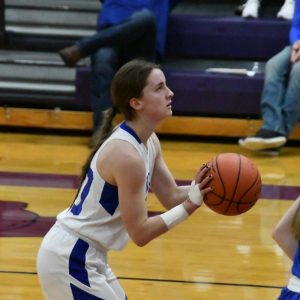 IRONTON — Winless Arcadia Valley girls’ basketball played with a lot of pride and gave Valle Catholic all it could handle.

However, the Warriors outscored the Tigers 10-4 during the final quarter to prevail in this Mineral Area Activities Association Small School Division opener.

“AV (Arcadia Valley) put up a strong fight,” Valle Catholic head coach Brian Bauman said. “They knocked down open shots that we gave them. They defended us well, and they fought until the end.”

Bauman showed more concern for how Valle Catholic is playing basketball right now, needing to improve on fundamentals in this second half of the season.

Valle Catholic played better versus Arcadia Valley in the second half, especially Ella Bertram — who scored all six of her points during the skein. Madelyn Griffard also provided a spark off the bench, with effort and quickness on defense.

The Valle Catholic-Ste. Genevieve “Old Settlement Showdown” was originally scheduled for Saturday was postponed due to expected poor weather.

However, temperatures remained above freezing, and the game could have been played even with wet roads for travel.

“I wasn’t overly disappointed,” Bauman said regarding the postponement. “The way we have been playing, it might have been a blessing. We could really use some ‘high quality’ practice right now.”

Bauman reported three of the girls were heading to a regional club volleyball qualifying tournament in Nashville last weekend.

Valle Catholic (9-4) played at Chaffee in a rescheduled game from earlier this season, and the girls face Valley Caledonia at home next Tuesday, Jan. 24.