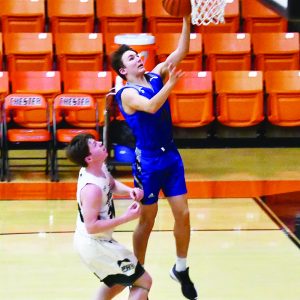 CHESTER, Ill. — The Valle Catholic boys’ basketball team finished sixth at the Chester Invitational as a result of Saturday’s 59-45 loss to Lovejoy.

Colbert Memorial Gymnasium was the site for a mid-season boys’ basketball fiesta with teams from both sides of the Mississippi River.

The game marked the return of Sam Drury, who had been rehabilitating since suffering an unspecified injury during football season at St. Vincent.

Aiden Heberlie was the Warriors’ top scorer with 18.

Waterloo’s Gibault Catholic earned the tournament championship with a 50-43 victory over Saxony Lutheran.

Chester placed third at its own event with a 69-47 victory over New Athens, and Valmeyer earned seventh spot — beating Perryville 59-37.

Final round games were played on Saturday afternoon as the Illinois side dodged most of the frozen precipitation that was forecast for the region.

Valle Catholic earned its only tournament victory during the consolation semifinals, topping Perryville 72-54 on Wednesday evening.

The first quarter between the Pirates and Warriors was nip-and-tuck, culminating in Andrew Truong’s 3-pointer from the key just before the buzzer sounded. Valle Catholic was ahead 20-17 after one.

Valle Catholic pulled away in the second quarter, outscoring Perryville 20-2.

Heberlie had nine of his game-high 34 points during the period while teammate Carson Tucker added six and Chase Fallert sank 5-of-6 free throws.

The Warrior lead grew to as many as 31 points in the third quarter after Heberlie followed his own miss.

They were up 56-29 heading into the fourth quarter.

Perryville, winless coming into the game, played with pride late — cutting Valle Catholic’s lead to 18 points, which proved to be the final differential.

Tucker and Fallert both finished with 11 points, and the Warriors were 13-of-22 from the free-throw line.

Valle Catholic (7-7) began the CIT Tournament on Monday, Jan. 10, with an 89-67 loss to New Athens — which relegated the Warriors to the consolation group.