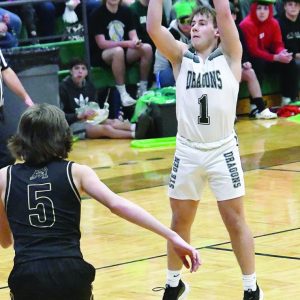 The game was moved up one hour due to impending expected poor weather, and Ste. Genevieve took advantage of the earlier start.

The Dragons jumped out to a 20-2 lead by the end of one quarter — which including four 3-pointers combined from Ricky Hunter and Nick Plati.

What’s more, every single player on the Dragons’ roster contributed at least one point.

“I think we played with a lot more confidence on the offensive end,” Ste. Genevieve head coach Robert Coleman said. “We have been improving the way we move the ball, and finding guys. It also helps that our shooting is getting better.”

Coleman said players are learning to adjust to their roles as the season wears along, and that’s helped, too.

Courtesy the thrashing over Fredericktown, Ste. Genevieve has secured another season with double-digit victories.

Hunter recorded a steal-layup combination and Plati connected on a shot from the key. Ste. Genevieve’s lead was 35-6 with 2:56 left in the second period. And the rout was on.

The Blackcats didn’t get any closer than a 25-point deficit the rest of the way, and Coleman was able to play his bench during the final five minutes — which was played with a turbo clock.

Nick Plati dished off a team-best six assists while Aiden Boyer had five and Rudy Flieg four. The Dragons registered 22 assists to just seven turnovers in this clean performance. 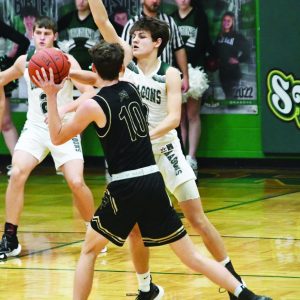 Flieg had a quiet 14 points while Hunter had 14 noisy points thanks to those 3-balls. Aiden Boyer produced yet another double-double with 13 points and 10 rebounds. Boyer also had four steals and deflected three passes.

Ste. Genevieve survived the junior varsity game, with the Dragons skinning the Blackcats 33-32.

Ste. Genevieve (10-5) will play three games from Tuesday, Jan. 18-25, facing DeSoto on the road — followed by a home game versus North County on Friday and St. Vincent also at home next Tuesday.

Coleman gave an advance account on the North County game.

“They are always an aggressive team,” the coach commented. “They bring a lot of physicality and full-court pressure. They don’t give you any time to relax. This will be a good test for us.”

North County is the only divisional school with a losing record, and even the Raiders are a decent 6-7 overall.