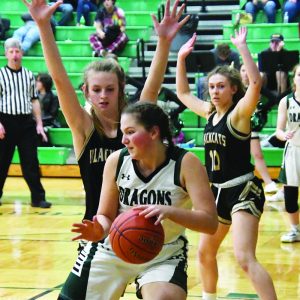 Winter weather can really hang you up.

Just ask the Ste. Genevieve High School girls’ basketball team — who hadn’t played a game since Dec. 28 at the Sechrest Christmas Tournament in Park Hills. That was so last year.

Once again for Ste. Genevieve, the opponent was Fredericktown in this Mineral Area Activities Association Large School Division opener.

The improving Blackcats proved to be too much for the Dragons yet again, winning 52-27.

Meanwhile, Kylee Clayton scored eight points and Chloe Staffen seven for the Dragons. Staffen scored the bulk of her points in the fourth quarter.

Walk-Robison said it’s been difficult on the Dragons to establish any kind of rhythm — after all, Ste. Genevieve has played just once in the past three weeks. That’s right, just once.

Fredericktown (8-6) scored 16 points in both the first and second quarters while playing exceptional defense.

The Blackcats were up 32-11 at intermission, and expanded their margin throughout the second half — to as many as 30 points.

Ava Meyer and Clayton tied for top honors in rebounds with five.

Games don’t get easier for Ste. Genevieve this week, playing at North County on Thursday, Potosi on Monday, Jan. 24 and at Central (Park Hills) Jan. 27.