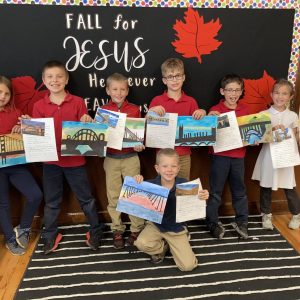 St. Joseph School second- and third-grade students recently participated in a research project, studying well-known bridges around the world. It was an elaborative project based on literature they read called, “Pop’s Bridge.” The students learned about different types of bridges, such as suspension, beam, arch and cable. Then they used their artistic ability to engineer a model out of construction paper, with a watercolor background. It was a favorite project in Lisa Kertz’s class. Eve Bunting wrote “Pop’s Bridge,” which was published in 2006. (Courtesy photo from St. Joseph School/Special to the Herald)