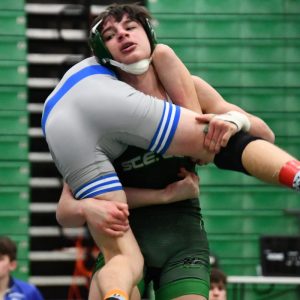 There were plenty of impressive milestones met — or even surpassed — on the home mat this past weekend.

What’s more, heavyweight Ryan Schmelzle continued to exert his dominance by winning all five of his bouts by pin in 12:36.

“It was nice seeing that they recovered from their loss against a very good Hillsboro team,” Ste. Genevieve head coach Jared Bonnell. “They take pride in winning this tournament, and I know it’s a highlight for them each season.”

This was a repeat performance for Ste. Genevieve, winning all five of its duals like the Dragons did a year ago. The team celebrated by showing off a plaque at the end of the day. Windsor finished second with four victories.

Bonnell said the day went as expected for Ste. Genevieve.

The final bout of the entire dual provided plenty of drama as Isaiah Basler from Ste. Genevieve earned an 8-6 sudden-victory decision over Valle Catholic’s Connor Clanton at 126 pounds.

Basler rolled to an early lead with three takedowns. Clanton was down 6-1 at the end of one period; however, he showed resolve with a five-point combination in the second period, including a three-point near fall. Isaiah secured the victory with a takedown 14 seconds into extra time.

Karter Worley of Ste. Genevieve and past state qualifier Kaden Gegg from Valle Catholic also put on an entertaining match at 106.

Worley was ahead, 5-4, after one period thanks to a pair of takedowns. Karter added two more takedowns during the second, and his lead grew to a comfortable 9-5 margin.

The Dragons captured eight wins over Valle Catholic by fall; however, Ste. Genevieve had to work for those pins. Seven of eight victories by fall went at least two periods. 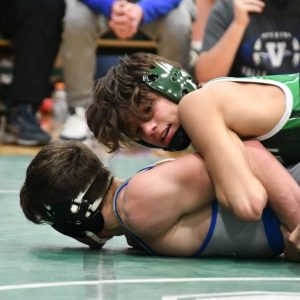 Valle Catholic’s Joseph Flieg extended Gross until the very end at 132 pounds. But, Gross still emerged victorious with a pin at the 5:54 mark.

In a 170-pound bout, Dragon Dalton McBride pinned Valle Catholic’s Tucker Bertrand (4:38), which rounded out the most competitive matches.

• Both the Ste. Genevieve boys’ and girls’ wrestling programs will compete at the St. Charles Invitational this Friday and Saturday.

“I’m pretty excited,” Bonnell said. “We will get to see a lot of teams that we haven’t seen yet this year.”

Bonnell said the Dragons will face several district opponents, and he expects the girls to have a competitive weekend as well.

• Hillsboro, a top-ranked program in Class 3, defeated Ste. Genevieve in a dual match from last Wednesday, 64-12.

Dalton McBride and Ryan Schmelzle picked up the Dragon wins by pin.