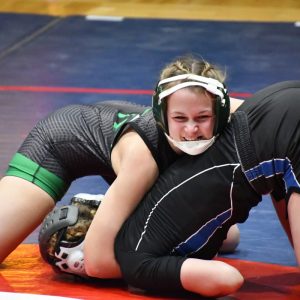 Katlynn Lay spearheaded the Dragons’ performance at the meet, with three victories by fall in her 130-pound weight class.

Lay pinned Central’s Savannah Scheldberg in 1:04, North County’s Memory Raker (1:45) and Lily Ahlvin from Cape Notre Dame in 4:22 — the only match in which Katlynn was extended beyond the first period.

Depth was one of the contributing factors in Ste. Genevieve earning the team trophy with 48.5 points, 15.5 more than host rival Central.

“Our program keeps growing and heading in the right direction,” Ste. Genevieve head coach Jared Bonnell said. “Having the numbers to compete definitely helped with our team win. It is often a numbers game in the smaller tournaments.”

Lay improved to 8-4 on the season.

Isabel Basler (125) earned a couple of first-period falls over Aine Callahan of St. Francis Borgia and Harley Vance from Potosi.

Geiler won both matches by fall in respective times of 0:51 — the quickest pin of the day overall for the Dragons — and 1:14.

• Ste. Genevieve will compete in a quadrangular at Sikeston tonight, with Windsor and Jackson also participating. The Dragons will travel to the St. Charles Tournament Friday and Saturday.

• The Dragons defeated Hillsboro in a dual match last Wednesday by a count of 36-24. Lay, Geiler and Mesplay all won their bounts by fall. Lay pinned Ella Bingman from Hillsboro just before the buzzer sounded to end the first period.