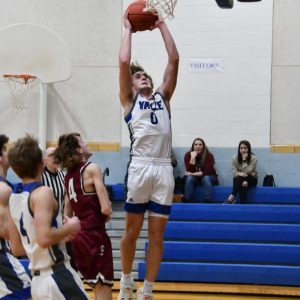 Valle Catholic’s Aiden Heberlie considers a dunk during last Wednesday’s game versus Bismarck. At the last second, Heberlie opted for a layup as part of his 29-point performance in a 71-33 cakewalk over Bismarck in MAAA Small School Division play. (PHOTO BY ERIC VICCARO/Herald staff)

If there was a boys’ basketball team in need of a bounce-back week, it would be Valle Catholic.

The Warriors opened Mineral Area Activities Association play with a pair of double-digit victories over Bismarck, 71-33, at home last Wednesday and West County, 66-56, on the road.

“It was important for us to have a good week, and I’m glad we were able to get two wins,” Valle Catholic head coach Tyler Search said.

Search admitted Valle Catholic was “sloppy early on against Bismarck.” But, the Warriors’ effort improved in the second half of the second quarter.

The Warriors canned 25-of-36 free throws (69.4 percent), pulled down 29 rebounds and kept Bismarck to 11 second-half points.

Heberlie dropped in 29 points to go with seven rebounds, four assists and three blocked shots. Fallert was 8-of-8 from the free-throw line and put together a double-double with 20 points and 10 assists, respectively.

When Tyler Gegg sank a free throw during the final minute of play, the final score was also the game’s largest differential between Valle Catholic and Bismarck.

Chase Fallert drained a pair of free throws to give the Warriors an 11-9 lead at the end of one.

Valle Catholic doubled up Bismarck in the second period, outscoring the Indians 26-13 for a 37-22 lead.

The Warriors’ 23-point third quarter all but sealed the victory, with a 62-32 lead after three.

Heberlie netted 19 points and Chase Fallert 17 in the victory over West County last Friday in Frankclay. Michael Okenfuss pulled down a career-high 14 rebounds.

“West County played us tough on both ends of the floor,” Search noted. “They did a good job of trying to take us out of our game.

“But, I thought we got in the middle of their zone, and attacked it with purpose,” the coach continued. “It was a physical game, and I was proud of our guys for not losing their composure.”

Keep this mind, too, the Warriors still haven’t played a game with its full line-up.

Harry Oliver and Carson Tucker didn’t play versus the Indians.

And Sam Drury, who was injured during football season, is closing on returning to action — he was dressed for Bismarck contest.

Valle Catholic topped Bismarck in the junior varsity game by a tally of 61-46.

Valle Catholic (6-5) will play in the 58th Annual Chester Invitational Tournament over in Illinois this week.

Valle Catholic will square off against Perryville tonight at 6 p.m. in the consolation finals, after losing to New Athens (Ill.) on Monday, 89-67.

Other first-round games were set for Tuesday with Saxony Lutheran squaring off against Valmeyer and host Chester playing Lovejoy — so there’s plenty of quality competition.