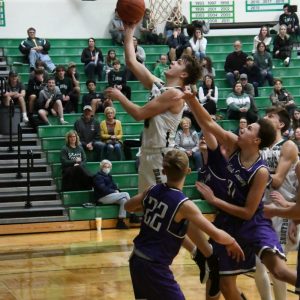 The Dragons outscored the Bulldogs, 29-12, during the second and third quarters — turning what was a close game early into a 44-23 advantage at the end of three.

“Our defense was really good the entire game,” Ste. Genevieve head coach Robert Coleman said. “I thought we stopped them from attacking us, and kept them off the boards. Offensively, we ran the floor and moved the ball well.”

Coleman said this was a “team victory” with everyone contributed on both ends of the floor.

Farmington continued having Ste. Genevieve’s number on Friday in the Mineral Area Activities Association Large School Division opener for both schools, the Knights downed the Dragons 57-40.

“I thought we did a great job early getting the looks we wanted on the offensive end, but we just didn’t finish well,” Coleman said of the Farmington game. “I think that wore on us some mentally.”

This marked the Dragons’ second loss of the season to Farmington, with the Knights also triumphant at the FCNB Bank-It Challenge in Sullivan in early Dec. 2022.

Farmington pulled away with a big third quarter, and the Dragons struggled to score in the second half — with a 49-27 cushion after three.

The Knights kept a hold of their lead like a reticulated python on prey. And their guards don’t make many mistakes.

Aiden Boyer paced Ste. Genevieve in rebounds (six) and steals (three). Wesley Basler chipped in with three assists. Ste. Genevieve lost the game, in part, to a 17-8 edge in turnovers.

Bracey Blanton lead all scorers with 20 points, including four triples, and J.P. Ruble added 14 for Farmington.

The Old Settlement junior varsity tournament will take place at Johnson Gymnasium next week on Jan. 17, 19 and 22.